One of the most popular dogs in the world, the Golden Retriever was bred, as its name suggests, to retrieve game in the shooting field. The breed has adapted to so many roles that there is virtually nothing he doesn?t do, with the exception of being professional guard dog ? a task for which his friendly temperament makes him quite unsuited. He has been a guide dog, a drug and explosives detecting dog, a tracker, an obedience competitor, in addition to the job he does so universally and well, simply being an energetic, fun-loving member of the family.

Easy to train to basic obedience or higher standards, rarely a choosy feeder, and with a thick coat that is reasonably easy to keep clean, it is no surprise that the breed has risen in popularity over the decades. He often has the largest entry at Championship Shows.

For many years there was confusion over the origin of the breed, but it is now generally accepted that it was the first Lord Tweedmouth who developed Golden Retrievers as a breed. ?Yellow? Retrievers had existed for many years in the Border Country between England and Scotland, and at first Goldens were registered and shown as Flatcoats being defined only by colour until 1913. They took their present name in 1920. 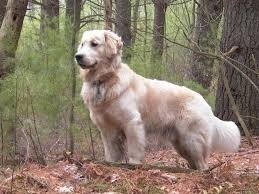