The wirehaired vizsla is a robust , multi purpose gundog, capable of performing a wide variety of tasks, both on land and water.

The breed is a somewhat larger, stronger boned and more robust dog than its smooth haired cousin.

Its coat, developed to withstand the icy water temperatures of its native Hungary, affords the breed both insulation and protection from the ravages of the weather, and thick, sharp cover into which it may be sent.

Temperamentally, it is a somewhat sensitive breed, unsuited to the heavy handed trainer, and benefits from involvement within the 'home' environment. The actually not only make great working dogs, but also double as super family pets.

Since the breeds introduction into the UK, in the early nineties, the breed has found favour with rough shooters, falconers and deer stalkers alike.

An increasing number are being entered into field trails, gundog working tests and spring pointing tests, and are taking some of the top awards.

The same weight and height as his the smooth-coated, but with a harsh jacket, he also has somewhat bushy eyebrows, which render his facial expression perhaps a trifle sterner. He also has very much the same style of behaviour as the smooth-coated breed, and is accepted as a good worker in the shooting world. 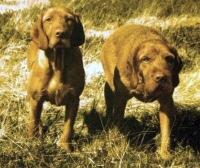