The GWP was created in Germany to serve the demands of the German hunters. The best hunting breeds in Europe can be found in the original gene pool. The breeds were selected for their courage, strength and intelligence. The coat had to be harsh and protective, able to withstand freezing waters in the intense cold of the north. The original demand was for a medium sized dog, not heavy, not light. Able to run and hunt, jump and swim, brave enough to catch, hold and kill wild boar, yet tender enough to retrieve partridge and grouse. Under the eye of regional breedmasters, only the best were selected for breeding. They had to conform to the breed standard and prove their working ability. The Germans enforce the doctrine of only breed from the best, and even the best is never good enough!

The GWP entered the British Isles after the 2nd World War. The earliest imported dogs found romance hard to come by and were mated to GSPs chosen for their working ability, the resulting crossbreeds were indeed superb hunters. Unfortunately the Kennel Club failed to realise the implications and the progeny were registered as GWPs. Throwbacks can still be seen in modern litters, and it is virtually impossible to find a modern dog without the recessive shorthair gene.

It was Major George Wilkinson (Andesheim), Tony Vaughan and Mineke Mills de Hoog (Wittekind), who bought in the next generation of selected imports. It was these imports that produced a firm and sound foundation for the breed. A later import, Mr Allround of Wittekind became famous for his superb character, gentleness, build and coat.

Early GWPs were fine hunters but often proved too sharp for the less experienced owner. The temperament can vary, and in the hands of an inexperienced handler they can become a nightmare. These beautiful dogs need lots of mental stimulation and sensitive handling. They soak up training like a sponge and at six months old they have the ability to win field trials. At eighteen months though they can be sulky, manipulative and outright anti-social, a true teenager, and weapon of mass destruction!

If you are looking for something cute and out of the ordinary, something that will keep you active, think again. In the wrong hands these dogs can become destructive. Exercise only makes a hooligan fit!

If on the other hand you have experience with intelligent dogs, understand canine psychology and can provide the sporting life the breed deserves, then buy a large bottle of scotch and a first aid kit, and good luck. Enjoy the wild ride that will last an unforgettable lifetime. 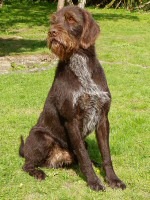 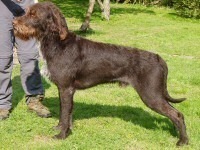