The Club held its one day Open Stake at Newbarn Farm, Calbourne, Isle of Wight, courtesy of Mr C Spence and the keeper and his team. Our judges were Steve Ashby, Tim Shipp, Judith Evans and Mell Brooks.

It as a chilly start to the day, but bright and the autumn sun shone for the whole day, providing much needed warmth. There was no shortage of game thanks to the keeper and his team. The club thanks the team of guns that shot the trial for us today, they shot well and there were plenty of birds on the ground to finish the trial after two drives.

Four dogs were lost in the first round, which provided deceptively challenging scenting conditions for the dogs, with game tucked into the grass. All eight remaining dogs made it through the second round before we moved off to the second drive.

For the third round all eight dogs sat during the drive and had two retrieves, with two being dropped before the third round which saw the final six dogs stretched over distance. One dog went out and the remaining 5 battled for placings. The final five dogs were very closely placed.

The awards were as follows:

The club owe a debt of thanks to all those who made the day a success, all the helpers and cake makers. As FT Sec I would personally like to thank everyone for a lovely day, it was a good card and we saw some really good dogs working today. We hope that you all have a safe journey home. 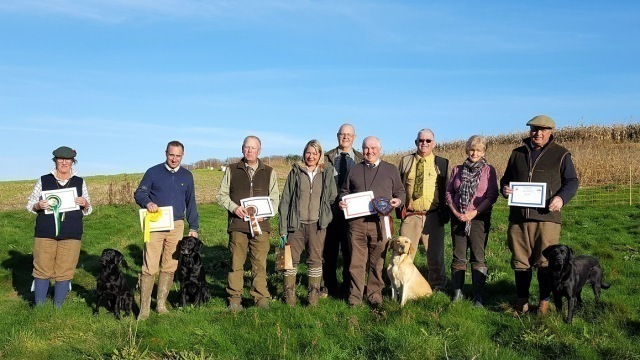